My current work explores the thousands of tiny details that we encounter every day, from the labels in clothes, bus timetables, shopping lists, teaspoons and lockless keys, to the weeds in my neglected garden.  Kurt Schwitters, Robert Rauschenburg, Alice Kettle and Jean Littlejohn all provide elements of influence, as well as weathered surfaces, boxes of old photos and tins of old nick-nacks found at car boot sales. 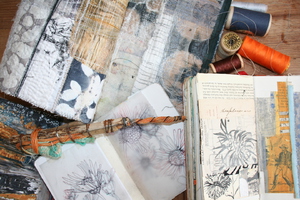 I completed a degree in Fine Art Painting in Manchester in 1990, where my work involved large scale assemblages which combined objects, paint and textural media; I was interested in creating a balance and a tension between these elements.

Since then I have continued to be interested in linking seperate and often unrelated elements, moving them around as if working out a jigsaw puzzle, until I feel they 'fit' or belong.

I started to explore textile media after a trip to Finland where I was able to work with weaving, felt and screen printing.  Trips to India and Thailand inspired me to use bold and even discordant colours, together.  The marks created by the sewing machine added a new drawing and joining tool to my toolbox.